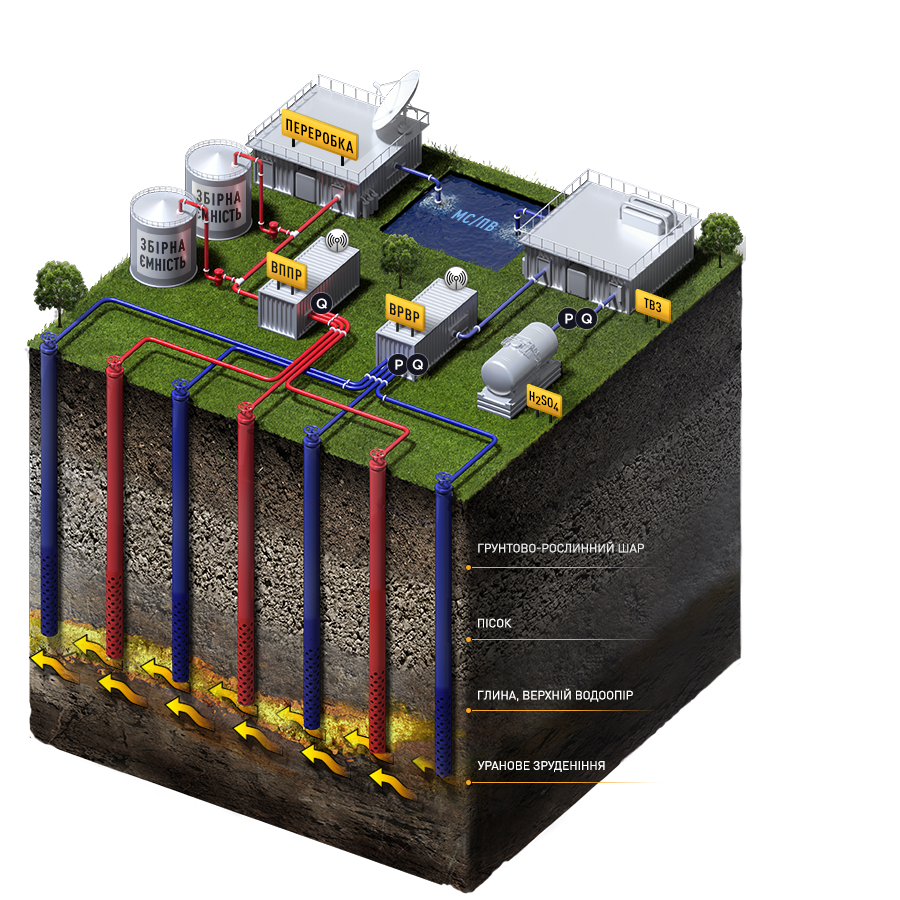 METHOD OF UNDERGROUND BLAST-HOLE LEACHING (UBHL) IS A PROCESS OF CLOSED CIRCUIT WHICH INCLUDES THE FOLLOWING STAGES:

1. Bore-hole drilling, installation of technical equipment and implements of the technological site. 2. Handling a weak solution of sulfuric acid concentration through injection wells into the ore-bearing horizon. 3. The main leaching process takes place underground, where the uranium turns into a productive solution. 4. The productive solution rises to the surface and the sorption process in the ion-exchange cols takes place. Then, the settlement and densification of uranium occur from the stripping product to produce yellow cake.

The method of underground blast-hole leaching has minimal negative impact on the environment, which is confirmed by long-term researches. International Atomic Energy Agency (IAEA) recognizes this technology as the most environmentally friendly and safe way of field mining. • The underground blast-hole leaching is a method of mining ore fields of sandstone type without lifting the ore on the surface by selective transfer of natural uranium ions in the productive solutions directly in the earth’s depth. Herewith the host uranium ore remains underground unlike traditional production methods (mine or pit mining), which require significant investment in recultivation, due to this fact the underground blast-hole leaching method is notable for high environmental safety, low expenses and simplification of technological operations. • After completion of the extraction by underground blast-hole leaching the quality of remaining groundwater restores to the original level set at the beginning of the exploitation, with the ability to restore their former use. Polluted water obtained from the aquifer evaporates or is treated and pumped back. • After removal from exploitation wells are balled up or blanked off, technological installations are dismantled, project sites are recultivated, after that the soil is ready for exploitation.